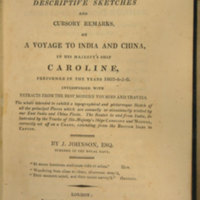 Surgeon James Johnson (1777-1845) was on board the 36 gun ship Caroline, commanded by B. W. Page. Dedicated to Henry Lord Viscount Melville, this work contains a topographical and picturesque sketch of all the places annually visited by the British East India and China fleets, including Madeira, Ceylon, Madras, Bengal, Malacca, Sumatra, Macao and Canton. After sailing through a typhoon, the Caroline eventually arrived at Canton, in early December 1804.

According to Johnson, 'Hog-lane' was the sailor's pleasure-spot, where they would lose their money and get drunk. Anecdotes abound of incidents between the Chinese and the English 'tars'.

The oriental voyager : or, Descriptive sketches and cursory remarks, on a voyage to India and China, in His Majesty 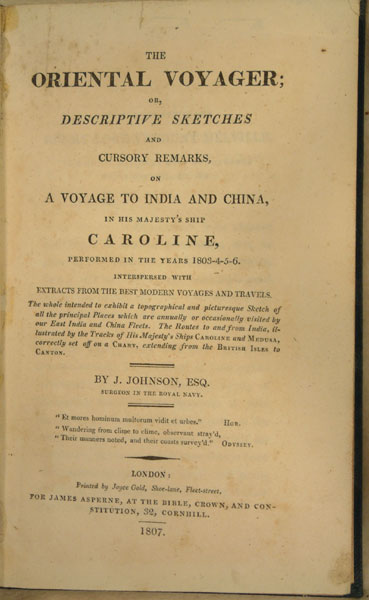